Saint John Paul II
Pier Giorgio Frassati is situated in the social and political upheaval of early-twentieth-century Italy. The Roman Catholic Church read the warning signs of atheistic Marxism; Mussolini filled Italy’s political vacuum with fascists; and Rome was still Italy’s disputed capital. The biography draws from a synopsis of selected letters and witness accounts, revealing Pier Giorgio’s increasing engagement with the world around him, shaped by his spiritual life. Pier Giorgio belonged to an upper-middle-class family and his parents transmitted fundamental values of truth, courage, and justice. Although he was deeply loved by his parents, they did not share his religious zeal. Pier Giorgio was concerned about helping the poor in the slums of Turin, the needy German students in Berlin, but especially in contributing to world peace. His spiritual maturity was expressed by making sacrifices: his friendship with a young lady offered up, bidding farewell to his best friend leaving for the Air Force, watching his sister depart once married, and his career in mining engineering abandoned. Pier Giorgio stood alone. He remained at home for the good of his parents to ensure peace and unity. He died at twenty-four years old. 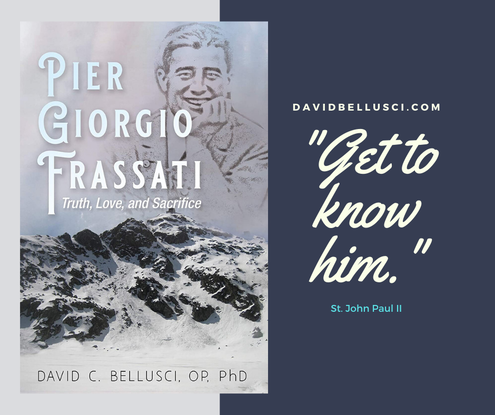 Endorsement
“Dominican Father David Bellusci has managed to produce a biography of Frassati that is not only eminently readable, but highly engaging as well! I was so fascinated by the Frassati story that I read the whole thing in an afternoon. The man I met in those pages is one I will forever value as a friend and companion on my Christian journey.”

Martin Farrell, OP, Dominican University College, and Dominican Friars Health Care Ministries of New York
“David Bellusci’s book is a well-documented and elegantly written journey into the fascinating life of Pier Giorgio Frassati. Through a detailed analysis of his letters, some of which are made available to the Anglophone readers for the first time, it provides crucial insights into Frassati’s intellectual and spiritual growth, and his social-political commitments in the aftermath of WWI.”

Daniele Lorenzini, University of Warwick
“Bellusci delivers both a hagiography and biography in one. His formidable use of primary sources is exceeded only by the exhaustive account of the saint’s political involvement. Bellusci’s achievement in retelling this oft-overlooked part of Frassati’s life cannot be praised enough, especially in light of modern-day PC culture that marginalizes those uniting politics with faith. An extraordinarily atypical life story, retold by Bellusci in remarkable fashion.”

Pier Giorgio Frassati Truth, Love, and Sacrifice is available at:

In both paperback and kindle edition.

Have you read Pier Giorgio Frassati: Truth, Love, and Sacrifice?
​
Would you like to write a review?

Thank you and God bless you!